Home Gold Market Discussion Their Own Man Says So!

Their Own Man Says So!

I have been warning about the overvalued stock market for some time.  Because we are clearly moving into a very troubling economic period, I have suggested you take profits you have in stocks and move them to the safety of gold.

The problems that I have described are so apparent that even the Federal Reserve itself is now warning about them.  So today, I will borrow from a story on CNBC describing a new report by the Fed.  The headline reads:

in market prices is possible if risks materialize”

Here is a Federal Reserve chart showing price movement of the Dow Industrial Average over the last couple of year.  Note the double-top it has put in at around 27,000. 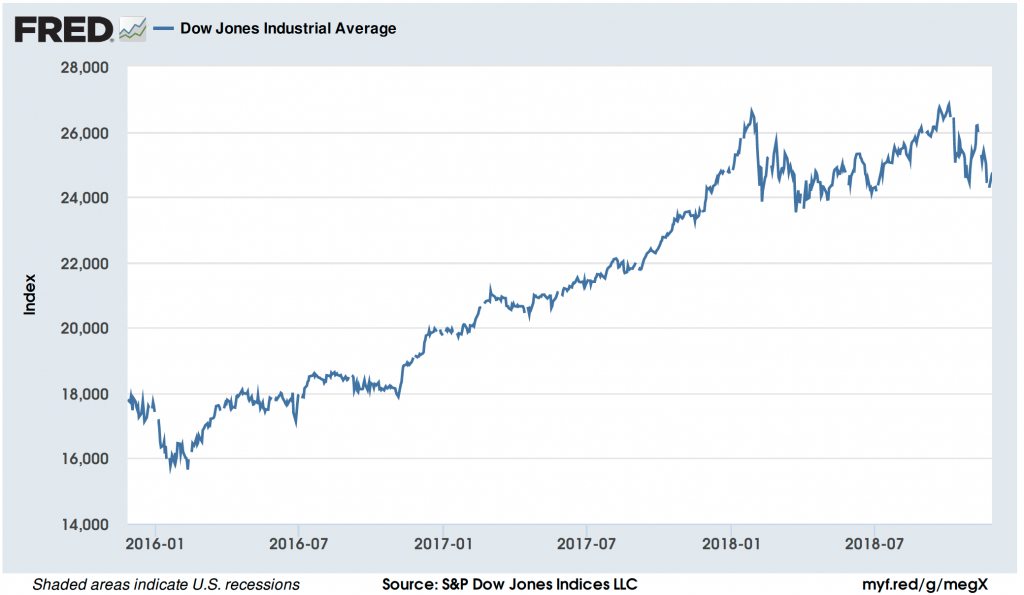 Now I urge you to carefully read the story:

In a lengthy first-time report on the banking system and corporate and business debt, the Fed warned of “generally elevated” asset prices that “appear high relative to their historical ranges.”

In addition, the central bank said ongoing trade tensions, which are running high between the U.S. and China, coupled with an uncertain geopolitical environment could combine with the high asset prices to provide a notable shock.

“An escalation in trade tensions, geopolitical uncertainty, or other adverse shocks could lead to a decline in investor appetite for risks in general,” the report said. “The resulting drop in asset prices might be particularly large, given that valuations appear elevated relative to historical levels.”…

The report further noted that the Fed’s own rate hikes could pose a threat. A market and economy used to low rates could face issues as the Fed continues to normalize policy through rate hikes and a reduction in its balance sheet, or portfolio of bonds it purchased to stimulate the economy.

Sometimes, when it becomes virtually undeniable, an economic calamity announces itself in advance.   It is as though there are warning signs, in bold, red letters, screaming about the stock market so loudly that even the Fed can no longer whistle past the graveyard.

Buy Gold on Any Level!

Good News for Gold in 2018: Bitcoin, Bonds, and Bubbles to Drive Prices?

Gold-Silver Ratio: Shrinking Along with Opportunity

7 Reasons Gold is the Best Investment of 2019